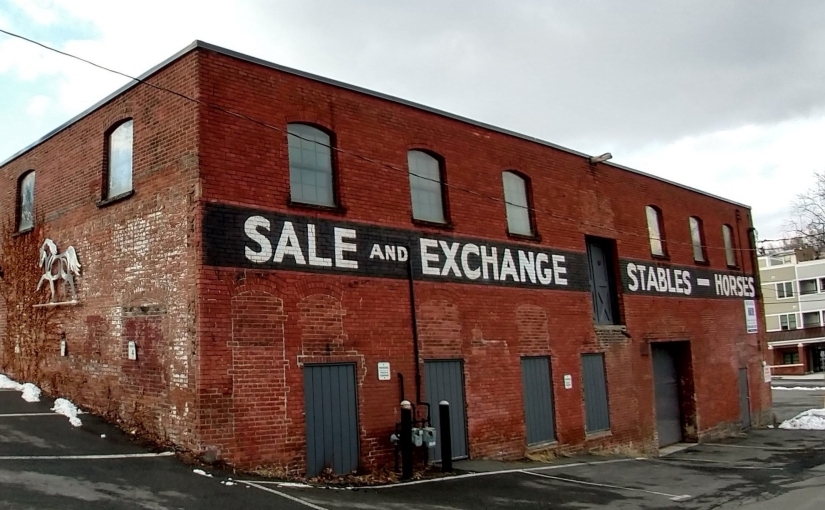 In the late 19th century, before the advent of the motorcar, Albany streets were largely the territory of pedestrians and horses. If one wanted to go somewhere one could walk, take a horse-drawn trolley, or — if one could afford it — call a coach. Vestiges of this equine-centric transportation culture remain: one can spot former carriage houses — identifiable by the hayloft doors and winch — in some of the well-to-do 19th century neighborhoods, and a handful of hoof-friendly Belgian sett roads have thus far escaped an asphalt fate. (Colonie Street and Old Broadway were paved earlier this year.)

One of the more conspicuous vestiges is the building at the corner of Spruce and Dove streets in Sheridan Hollow, at the base of the Dove Street steps. A ghost sign across the southeast wall reads “SALE AND EXCHANGE”, “STABLES – HORSES”, and the outlines of horse stalls are readily apparent. A plaque on the Spruce Street side gives a construction date of 1890. By 1914, the stable was owned and operated by William J. Thomson. About a decade earlier (1905) Thomson had been associated with the boarding stables at 83 Elk St.

Fast forward to the modern era. The building’s northeastern facing wall was–until recently–home to a mural of an upturned rodent. It was either a rat or a squirrel, depending on whom you asked.

Painted by Belgian artist ROA for the Living Walls Albany revitalization project, the mural became the focus of neighborhood animus. Some deplored it as representative of a cynical outsiders’ impression of Sheridan Hollow, and condemned it for detracting from the positive forward momentum. It was removed by the property owners at some point before early January 2017.  The building is being leased by Trinity Realty Group, as of this writing.