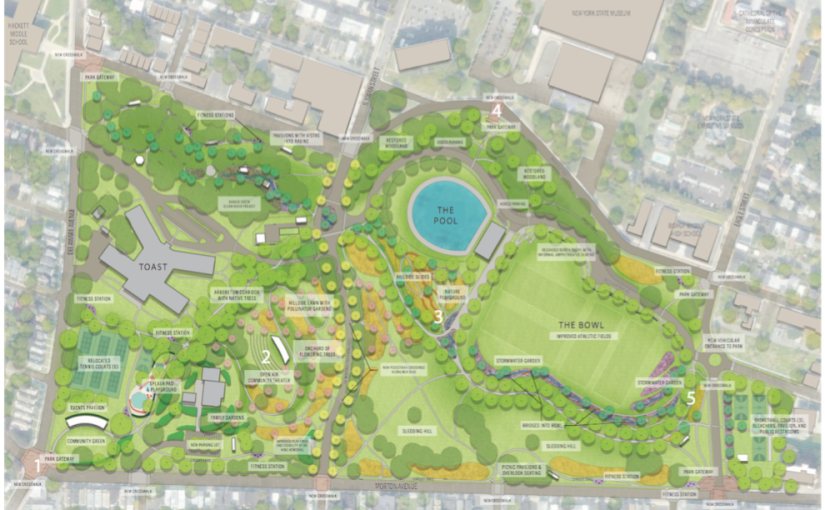 The City released the (almost final) Lincoln Park Master Plan during a public presentation at TOAST Academy on Tuesday evening.  This third and final meeting capped a months-long public input and design process. If you’ve been following the coverage at All Over Albany, you’ll notice that many of these ideas appeared or were proposed at one of the previous two workshops. Before I get into the specifics, HERE’S THE LINK TO THE PLAN IN HD (it’s big, so might take a minute to load). If you missed the meeting, you can submit comments through the master plan website. 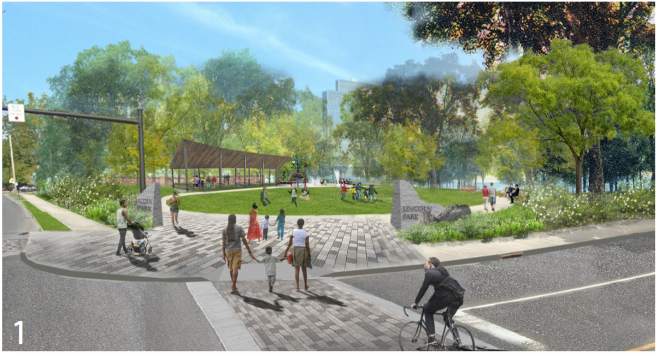 One of the new “gateways” will be where Morton and Delaware avenues form the park’s southeast corner. Once upon a time vehicles could enter from that intersection and cruise down an elm-lined park road, but the area has since become an obscured pedestrian-only entrance, crowded by lacrosse fields, tennis courts, and a gazebo. Instead, the plan proposes a new mini-plaza with walkways leading to a broad “community green” and events pavilion.

“This could be seen as a main entrance, or one of the main entrances, to the park,” said Valentine. To accommodate the new section, the tennis courts would be shifted north, a bit closer to TOAST Elementary. Beyond the community green, the new path would lead to the existing basketball court, a renovated spray pad and playground; past the former Sunshine Academy and James Hall office; and then through an “arboretum corridor” of native trees.

Early in the process, city planners were contemplating how to best use the steep hillside just below the former Sunshine Academy. South End residents lent the answer: a community theater. This was “one of the most popular items,” said Valentine. The plan envisions a southwest facing covered stage with hillside seating for about 500. Check the concept drawing at top.

On the hillside just below the stage would be an orchard (think the one in Washington Park) and hillside pollinator garden(s). Parking for this and nearly facilities would be provided by a new lot, with access from the Oneida Terrace/Morton intersection. The existing road between MLK and Delaware would be removed. 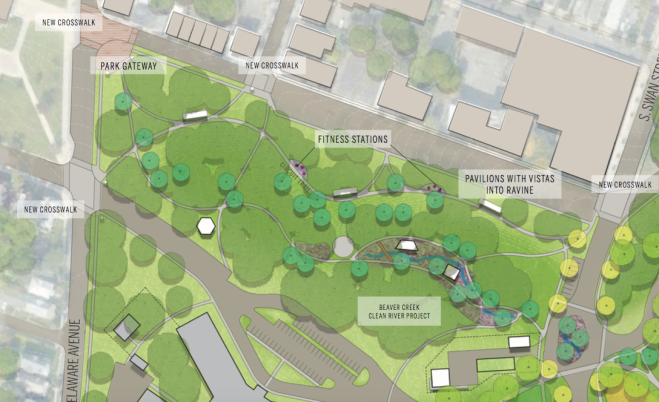 The topography of the park has long presented design challenges. One such area is the Beaver Kill ravine, a forested gully that runs between TOAST Elementary and Park Avenue. The plan calls for constructing a potentially elevated path along the creek, and uncovering the rocky outcrops. Those outcrops garnered the consultant’s attention, spurring the idea that their rough texture might be replicated by similar stone markers are each gateway. This would make the entrances more unique, and thus more easily identified as park entrances. Branding, if you will. The plan also considers creating a small falls in the ravine, in homage to the former Buttermilk Falls.

This ravine is the site of the Beaver Creek Clean Water Project, which is going through its own planning process. 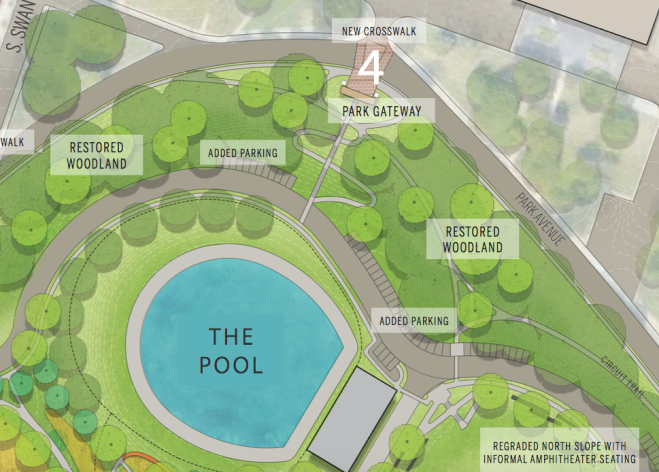 A steep and almost impenetrable “wall of trees” blocks view of, and access to, the park from the north. The plan envisions constructing a stairway and ADA-compliant switchback ramp at the top of the north bank, across from Museum Drive. This would open up a view from Park Ave, and would provide an easy entrance from the ESP.

Talking about trees… a survey completed for this plan (if I recall correctly) found a variety of natives and ornamentals, ranging from magnolias to dawn redwoods. The City would like to add more native trees, shrubs, and meadows, while cutting back on invasives such as Norway maple, which has created a monoculture on the north slope. Valentine mentioned potentially doubling the magnolias on MLK Boulevard, and adding more witch hazel and shadbush to the mix.

“We heard from everyone that the Pool is the heart of the Park,” said Valentine. Prompted by intense public feedback, the form of the new pool will closely follow the current design. This announcement triggered the crowds’ applause, which is unsurprising — the community (you can include me here) has been fiercely protective of the pool in its current form. That means a circular, pond-like design with beach-style access. The pool playground will stay, but may be redesigned with hillside slides and a nature theme. And, in an effort to alleviate parking woes at peak hours, head-in spots have been located along the loop road. 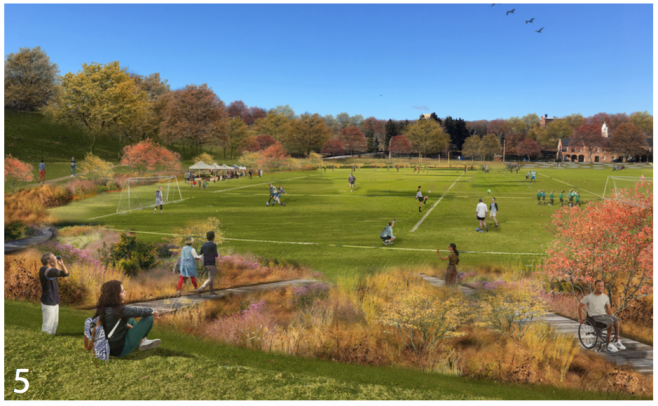 “There are a number of elements that we want to preserve and renovate,” said Valentine — and one of those is the athletic bowl. The plan calls for informal amphitheater-style seating on the regraded north edge, reconfigured fields, and a “stormwater garden” on the south edge. Members of the various athletic clubs stated that the perennial issue is soggy fields, leading to muddy games. The hope is that draining the fields into the “stormwater garden” would alleviate this issue.

A surprising inclusion (at least to me) was a renewed focus on the Park’s history, of which there is no shortage. The City would like to highlight that with a set of signs interpreting major periods, events, and people. These might cover:

Lastly, a few items that I didn’t quite fit in the above sections: