This Warehouse District building at 1031 Broadway in Albany may have most recently been home to Argus Litho Inc. Press, but its current use denotes it the St. Argus Home for Forgotten Office Furniture. Inside, nearly every easily accessible space has been filled with 80s and 90s office furniture, in some places stacked nearly ceiling high. However, if you peek around the furniture you might find some remnants of its lithographic legacy: a several ton composing machine, a time card clock, or a set of typesetting machines (just look in the north tower.)

The four-story red and yellow brick edifice was built in 1915 by enterprising businessman seeking to draw business to Broadway. They commissioned prominent Albany architect Marcus Reynolds–known for designing Hackett Middle School, Hook and Ladder No. 4 on Delaware Ave., and the glorious Neo-Gothic D&H Railroad headquarters (now SUNY administrative offices)–who delivered this masterpiece, one of his latter designs in a more than three decade career.

The building has sat idle since the early-1990s, when the heatset web press printer went out of business. The commercial printer was the last vestige of The Argus newspaper corporation, which operated in Albany for 108 years. The building has long been owned by Michael O’Brien, who used to operate the Larkin Bar and Restaurant on Lark Street. He is also the owner of the Williams Press building, another early 20th century corporate buidling  north on Broadway near Montgomery Wards.

Built of yellow and red brick, the four-story edifice is topped with twin towers roofed with terracotta tiles. Each tower holds a water tank and the interior floors are trisected by massive–and heavy–fire doors that swing on a rather ingenious chain pulley system. The concern with fire is evident throughout. I only hope that a developer and the city come to agreement on a future for this building, and soon. I fear the same fate its designer feared may still occur–as it has for so many other historic Albany buidings. 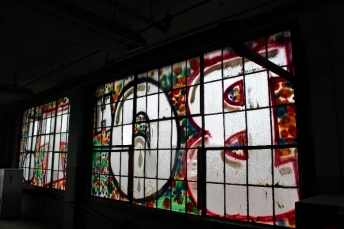 Sadly, the graffitti was woefully lacking on everywhere but the roof. 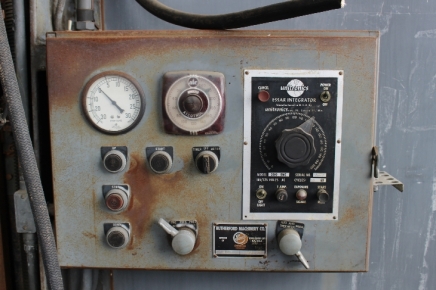 Look at that logo though…

There were more than 2,000 office chairs. And some of them were quite plush too.